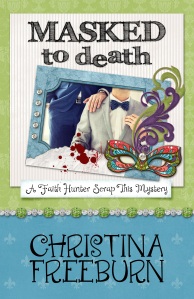 Masked to Death, the fifth book in the Faith Hunter Scrap This Mystery Series, is now out. I went on my first cruise at the end of 2010 and feel in love with this type of vacation. When part of the plot came to me, I started thinking about where to set the book and recalled that in book one, Cropped to Death, Ted mentioned that his mom worked on a cruise ship. My muse said, “Perfect.”, and the story developed from there.

Here’s a short description about Masked to Death:

A Caribbean cruise is the perfect setting for a Roget wedding, and Faith meeting Ted’s family. She also hopes the vacation gets their stalled romance moving, but it doesn’t take long for that dream to capsize. Ted’s daughter hates her. The ex-wife is adored. Odessa Roget is surly. And the banned father of a groom, John Roget, requests Faith’s assistance in bringing down a jewel theft ring masterminded by his ex-wife.

Having had a man she loved accuse her of a crime, Faith won’t let Odessa travel down the same path and agrees to help. Faith sets her course on uncovering the true criminals—which might be a groom’s best friend. The romantic week turns disastrous as a wedding is interrupted, suspicious deaths point to murders, and Ted’s daughter schemes to reunite her parents. Instead of diamonds being a girl’s best friend, Faith finds they’re cruising her toward Davy Jones’ Locker.

Over the next few weeks, you can find me (or Masked) visiting a few places in cyber world where I’ll be answering some questions, talking about creating a travel journal and a fictional cruise, and where some readers will let you  know a little bit more about Masked to Death. I hope you can stop by.

February 3 – A Chick Who Reads – REVIEW

February 5 – 3 Partners in Shopping, Nana, Mommy, &, Sissy Too! – Excerpt (shopping on a cruise) from Masked to Death

Mystery and Romantic Suspense Author View all posts by theselfrescueprincess