This year, I vowed to complete one craft (or one stage for longer projects) a week. I love to craft and on January 1st I realized I hadn’t spent much time crafting during 2016. I was going to change that for this year and my goal is to finish up some crafting projects (Disney vacation album), try some new crafts (painting, Deco Mesh wreath making, and use the fabric I bought for projects but have been scared I’d mess up and waste the money I spent so I’m letting all my lovely fabric and patterns just hang out in my storage unit. No more! I realized it’s no more of a waste to not use the fabric and patterns as it is to make a mistake sewing the item (cute patterns for purses I really want to sew). The only way to get better at sewing is to sew.

Here are the projects I have completed so far: 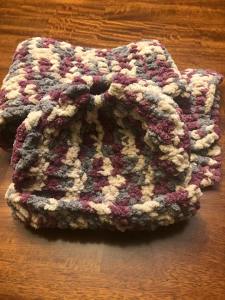 Week 1-2: A matching scarf and messy bun hat for my younger daughter. The messy bun hat I used a pattern, and the scarf I made using the double crochet stitch. 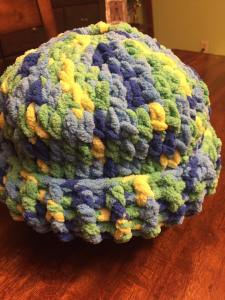 Week 3: A messy bun hat for my oldest. She saw a picture I posted of her sister’s hat on Facebook and wanted one. I used the same pattern as the one for her sister but this time I used the front and back post stitch for the brim. 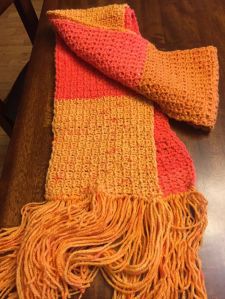 Week 4-6: I’ve been crocheting a little over a year and I hadn’t made myself anything yet. I crocheted blankets, mermaid tail blanket, scarfs, a cozy for a Beta fish tank, but nothing for me. I wanted to use a Caron Cake and on the sleeve of one of the Cakes was a pattern for this scarf. The completed scarf is 70 inches long so I broke it down into steps as I wouldn’t be able to complete it in one week. I love the fringe! 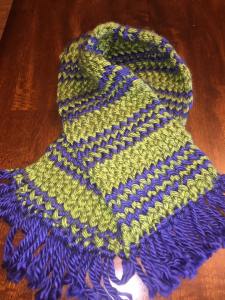 Week 7: When I was crocheting my scarf, my favorite little guy saw it and asked if I’d make him a blue and green one. Of course! I used a scarf knitting loom, and stepped way out of my comfort zone by creating my pattern. I love how it turned out. 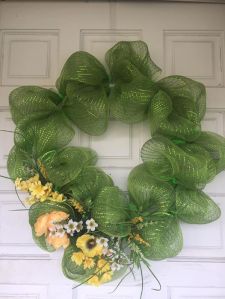 Week 8: Deco Wreath. I’ve always wanted to make a Deco Mesh wreath and as this 2017 is my year of crafting I decided to give it a try. It also helped that the day I was at AC Moore the supplies for the wreaths were 50% 0ff. I like how the spring wreath turned out and I have supplies to make a Frozen inspired wreath. 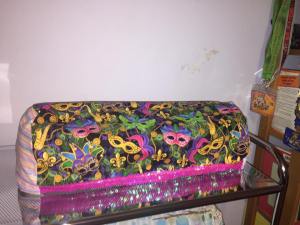 Week 9: I’m donating a basket filled with goodies for a prize at the crop I’m attending and I sewed a Cricut dust cover to add to it. I went with a Mardi Gras theme as it matches the cover of my book Masked to Death as it’s also included in the basket. I’ve sewed some Cricut/Cameo dust covers before but this was the first time I sewed on an embellishment–sequined ribbon. 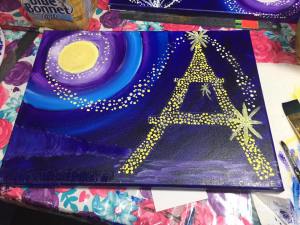 Week 10: This week was a very crafty week for me. I attended a three-day scrapbook retreat so I completed some layouts, and the night before the crop I took a painting class with my oldest. We had a wonderful time and I’m hoping we can make time to go to another one. I dubbed my masterpiece Tinkerbell in Paris.

It’s the time of the year when I plan out–and hopeful start –the Christmas gifts and decorations I want to make. So far, I have five on my list (four I’ll mention as one is gift that I think she reads my blog). I’m debating on a sixth but with a book in progress, tax training to complete, and wanting to spend time just enjoying the holiday season, I don’t want to become overwhelmed. I enjoy crafting and don’t want a long must-make-list to turn it into a chore. 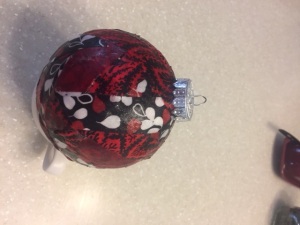 Project One: Christmas Ornaments for our ornament exchange party.

Last weekend, I attended a wonderful craft day and learned to make this ornament. It was a fun and simple process, and even better I have most of the supplies on hand. All I need are some plastic ornaments, but I couldn’t pass up this fabric 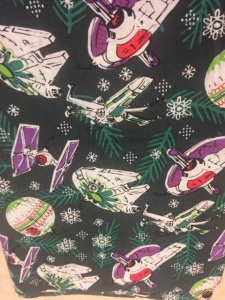 when I went in search of supplies for Project Two. I think this design will make an awesome Christmas decoration. The only problem will be I’ll probably want to keep them instead of adding them to the ornament exchange. 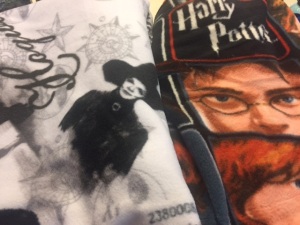 Project Two is one that was a request: Harry Potter Fleece tie blanket. I had made one as a birthday gift and my daughter requested I make another one as hers has been permanently borrowed by a very adorable little girl.

She hopes that gifting one to the borrower will mean she’ll get her blanket back. To make sure that happens, I bought the exact same fleece and will make it the same size. I’m a little concerned if I make it in a child size that  the little one will want to keep the larger blanket. 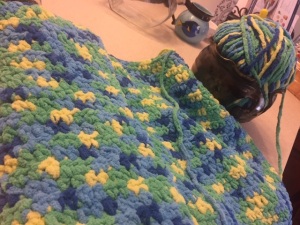 And that isn’t the only blanket I’m making this year. For Project Three, I’m crocheting a Mermaid Tale Blanket. I have started it and am halfway done with the first section of the tail (the main body–the easy part). I’m hoping when I get to the fins, it goes as smoothly. I’ve only made basic blankets and I’m hoping I can decipher the pattern enough to have it look like a mermaid tale.

The final project on my list (that I’m going to talk about) are gift tags. I made some cute ones last year for a giveaway and am planning to do the same this year–and keep some for myself. I really enjoyed making them especially since I can use my Cameo and/or Cricut Explore Air 2 (which is on its way to me) to cut them out.